After a week where the Accidental Locavore’s farmer, Paul, was relaxing (well, sort of) at a Bluegrass Festival, the farm-basket is back and overflowing! Making their first appearance, so it must really be summer, tomatoes. Both big beefsteak, and mixed little yellow pear, and other cherry tomatoes. Patty pan squash, eggplants, peppers, yellow, green and lilac. Lovely arugula, basil, mesclun, radishes, and cucumbers, both regular and pickling size, and the best corn so far.

So what’s the plan? Since it was so hot Saturday night, on my way back from Connecticut behind the world’s slowest driver, I had plenty of time to think…eggplant parm was going to be too heavy (look for the recipe on Friday), but what would be good would be a little steak tartare, a nice ear of corn, and a cold glass of rose. While I was cutting onions, beautiful red ones from down the road, I realized that I had all the ingredients for tabouli, so I kept chopping. Here’s the recipe: 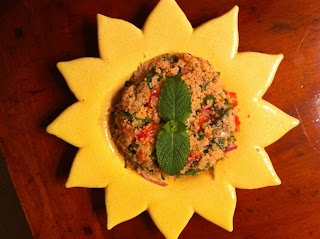 You can serve at room temperature, or chilled. Toasted pita is a good accompaniment, but trust me, steak tartare, corn and a glass of rose, was pretty OK!

This site uses Akismet to reduce spam. Learn how your comment data is processed.

About the Accidental Locavore